Man-Kit Leung, M.D. is a board certified otolaryngologist/head and neck surgeon. He graduated summa cum laude from Harvard University and attended medical school at the University of California at San Francisco where he was co-President of the Alpha Omega Alpha Medical Honors Society. He completed his internship in general surgery and residency in otolaryngology/head and neck surgery at the Stanford University Medical Center. He subsequently underwent sub-specialty training in rhinology and endoscopic sinus, skull base, and orbital surgery as a clinical fellow at the Massachusetts Eye & Ear Infirmary at Harvard Medical School. In 2011, Dr. Leung completed the curricular requirements and passed a rigorous examination process to become a Fellow of the American Academy of Otolaryngic Allergy.

Dr. Leung has authored more than 20 scientific papers, abstracts, and book chapters and previously served as Adjunct Clinical Faculty at the Stanford University School of 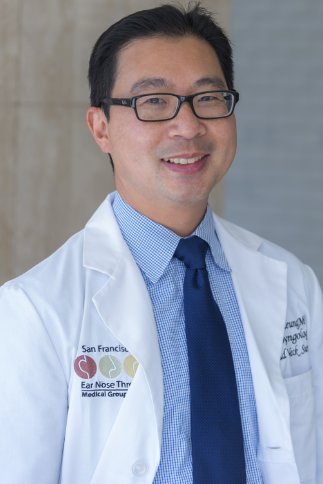 Medicine Department of Otolaryngology/Head and Neck Surgery. He has a particular interest in diseases of the nose and sinuses and specializes in nasal allergies as well as in using minimally invasive techniques through the nose to access the sinuses, eyes and brain.

Dr. Leung is native to the San Francisco Bay Area and is excited to serve the community in which he was raised. He speaks Cantonese and Mandarin and enjoys hiking, traveling and spending time with his twins.

I am accepting new patients.

Physician and Surgeon
Medical Board of California

Diplomat
American Board of Otolaryngology

Languages other than English:

“Diagnosis and Treatment of Candida as a Cause of Invasive Fungal Sinusitis.” : 2007
Goyal P and Leung MK. Poster presentation at The Triologic Society Combined Sections meeting, 2007.